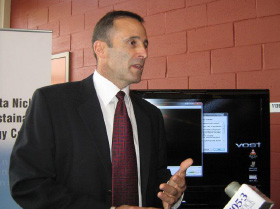 John Whitehead, of CareLink Advantage, explains how a sophisticated monitoring system can help seniors live safely in their own homes.

Learn more about how a sophisticated system can help seniors live safely in their own homes.

High-tech help for seniors
By: Carol Mulligan
The Sudbury Star

A research project launched at Cambrian College will test technology and its ability to help frail, elderly seniors live at home independently, out of hospital and long-term care.

Twenty senior citizens, who may be destined for placement in a nursing home, will be the subjects in the 12-week study – with 10 of them having access to an online system to monitor their safety at home and 10 to be tracked without the system.

John Whitehead is president of CareLink Advantage, a company which uses motion detectors, bed sensors and other technological devices so caregivers and family members can monitor their loved ones when they can’t be there in person.

Whitehead knows first-hand the value of such a program as his family struggled to care for his mother, who had Alzheimer’s disease.

Cambrian president Sylvia Barnard told people attending a news conference to announce the research project how her mother, who also had Alzheimer’s disease, could have benefited from such a program.

Whitehead said the idea for CareLink Advantage was born “more out of necessity than anything else.”

Lisa Allen, principal investigator at Cambrian College, said the program will have nursing students track 10 families who will be equipped with the CareLink system, at no cost, and 10 who won’t have the system.

Student researchers will then do a direct comparison between the two sets of families.

“The seniors are just expected to go on living their life in a safe manner,” said Allen.

At the end of the study, a report will be prepared with an eye to having it published in peer review journals.

Whitehead said keeping an eye on seniors in their homes has resulted in some continuing to live independently for six months to two years longer than they would have otherwise.

The research study may make the business case for how a program such as CareLink Advantage could save the health-care system money.

In New Brunswick, where a pilot project was run with the system, it is now offered as part of a basket of services to families – along with personal support workers, nurses and other home services, said Whitehead.

The system costs from $130 a month to $170 month for a “robust” system that will allow caregivers to check if their loved ones are wandering, taking medications properly and eating.

The system can also alert family members if their loved ones fall.

If that business case can be made, it could help delay or eliminate the need for seniors to move into long-term care, reduce hospital admissions and prevent decline in elderly people. That would save taxpayers money, said Whitehead.

“If we could have 10 people turn down their long-term care bed, that puts a little dent in the list” of people who need a bed in a nursing home, he said.

For more about CareLink Advantage, go to www.carelinkadvantage.ca