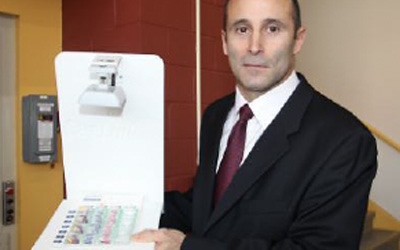 CareLink Advantage president John Whitehead shows off a piece of technology used by the company to determine whether or not a senior has taken their medication. The device features a camera and sensors. Photo by Heidi Ulrichsen

Cambrian partners with CareLink for study

When Sonia Del Missier’s mother, Milena, was diagnosed with Alzheimer’s a few years ago, the family opted to have video cameras and sensors installed in her home by Sudbury-based CareLink Advantage.

While Milena now lives in a retirement home, Del Missier said she’s certain the technology delayed the move for at least a year.

If the senior, for example, left the house during the night, Del Missier would receive a notification on her cellphone.

She’d also receive a notification if her mother was out of bed for a long period of time at night, prompting worries she might have fallen.

Del Missier said the system did avert at least one potentially problematic situation. One evening, she received a notification which said her mother had opened the door at 9 p.m.

“Then I thought ‘I’m not going to believe you.’ Sure enough, the bed sensor triggered that it was occupied. It really does give you peace of mind.”

Del Missier, Cambrian College’s vice-president academic, was on hand at a Nov. 22 press conference where the college announced it is partnering with CareLink for an applied research project.

Four of the college’s bachelor of nursing students will be testing the system over 12 weeks, starting in January, with the help of 20 local seniors and their caregivers. Ten seniors will have the technology installed in their homes, and the other 10 will live in their homes without the technology.

The project is supported by $30,000 in funding from the College Ontario Network for Industry Innovation.

Cambrian president Sylvia Barnard said the project is a good example of the kind of research done at the college, which often involves testing prototypes or showing the effectiveness of technology.

“When we do research, it’s not our faculty’s idea,” she said. “The idea, or the problem, originates from the community, or from the entrepreneur. It’s an industry-driven process.”

The CareLink service is already fully funded by the province of New Brunswick. The government of Alberta has completed a pilot project and is working on funding models.

A pilot project is also underway in British Columbia with the intention of funding CareLink Advantage services in that province.

John Whitehead, the president of the company, said he hopes the Cambrian study will prove the effectiveness of the technology for the province of Ontario, so that the service will be funded here.

Right now, it costs between $130 and $190 a month for families to purchase the service privately in the province.

He said the technology CareLink uses was developed for the security industry, but the company is just using it differently.

In many cases, the system has led to families being able to delay the placement of their loved ones in long-term care, Whitehead said.

“We all know the wait list for long-term care beds,” he said.

“So, in a year, if we could have 10 people turn down a long-term care bed, that puts a little dent in the list. It doesn’t fix it, but it takes a bite out of it. Everything we can do helps.”

Ensuring seniors don’t lie on the ground for a long time after falling can also make a big difference to the health-care system, Whitehead said.

With CareLink’s cameras and sensors, the client’s loved ones will know soon after the accident occurs, and be able to get them help, he said.

Contrast that with a senior who falls and lies on the ground for 14 hours, becoming dehydrated and going into shock.

“The chances of them being admitted is a lot higher,” Whitehead said.

“So there goes another bed in the hospital … But once you’re admitted into the hospital as a senior, the evidence tends to support that you decline.Then all of a sudden somebody that you never dreamed would be an ALC patient becomes one.”

Lisa Allen, the applied research developer at Cambrian involved in the project, said the project will involve families on the brink of placing their loved one in assisted living or long-term care.

The researchers will attempt to determine if the families using the CareLink technology fare better than those without the technology.

They’ll be followed by the students throughout the 12-week period of the study, and asked to fill out questionnaires afterwards.

The researchers will write a report about the project, and plan to have it published in a peer-reviewed journal, she said.

Cambrian nursing professor, Laura Killam, said she thinks the project will be a great experience for her students.

“It’s not just any project,” she said. “It’s a project they really feel can make a difference in the lives of the person that’s staying at home, as well as the caregivers.”